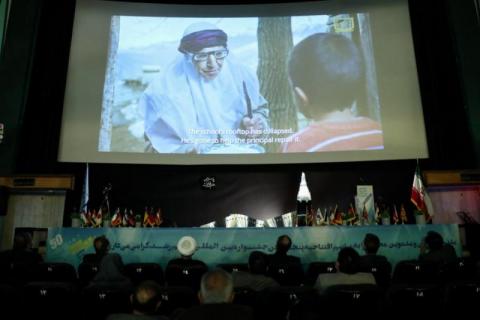 The 50th Roshd International Educational and Educational Film Festival started this morning, Saturday, February 13th, in the presence of a number of officials and managers of the Educational Research and Planning Organization and in compliance with health protocols and instructions of the Ministry of Health.

According to the report of Public Relations and International Affairs of the Educational Research and Planning Organization, at the beginning of the ceremony, after reciting a few verses from the Holly Quran, the teaser of the 50th Roshd International Film Festival was shown to the audience and then the short film "Select" by Mobina Hamzeh Which was displayed in the accepted student section of the festival.

Presence of 100 films from the 40th festival period in textbooks

Following the opening ceremony, Sayed Sa'id Badiei, Secretary of the 50th Roshd International Film Festival, announced a review of the festival process due to the Corona epidemic and said: "History year, due to the outbreak of Corona, all festivals and even the Fajr Film Festival were in stagnation. So we tried to review the processes.

He continued: "Contrary to most predictions, which said that the production of films would decrease due to the Corona, very good works in terms of quantity and quality reached the secretariat, so much so that we received about 411 films in the national section." Among these works produced by teachers and students, over 60 works made it to the competition section.

The secretary of the 50th Roshd International Film Festival said about the screening of these works: "From today, these works will be distributed among the curricula of education networks for students."

He explained about the classification of these works in this festival and said: "in the past, filmmakers provided their works in the form of films or DVDs to the festival, but during the last two years, we have to upload the films in the international section, through the submitted links. That's why it takes a lot of time to sort and download.

The secretary of the 50th Roshd International Film Festival continued: "This year, over 2100 films were received by our colleagues in the competition department and were classified into four categories: long story, short story, animation and documentary, which deserves special thanks." Following this process, God willing, this year on the eighth floor of the Research and Planning Organization, the works will be displayed in the form of webinars and will be reviewed with the presence of experts so that it is possible to use these works in the textbooks and in QR format.

He called the Roshd Film Festival one of the oldest events in the field and said: "This event is one of the few programs that have been registered in UNESCO, so we should know its value and finally benefit from the festival's output properly. In fact this festival is somehow unique in the world and there are only three events similar to this event in the world, because other festivals are generally subject-oriented, while like the Roshd Film Festival, are not content-oriented".

The secretary of the 50th Roshd International Film Festival announced the review of works in the provincial section and added: "After the end of the festival, the films and works shown in the provincial space will be analyzed in person and in an expert format."

After the speech of the secretary the "Eyeglasses" film directed by Marjan Ismaili was screened.

Mohammad Ebrahim Mohammadi, Director General of the Office of Publications and Educational Technology of the Research and Planning Organization, also thanked those involved in the event and said: "Contrary to popular belief, this year the reception of the festival and the submitted works were very good. Not only was it no less than in previous years, but it was even better in some areas. As in the international section, we see works that are excellent and commendable in terms of quantity and quality.

Mohammadi stressed the need for more extensive planning for the next fifty years of the festival and said: "Fifty years is a turning point of the festival, so the next steps are very important. Therefore, we must use the fiftieth anniversary of this event as an excuse to reconsider shortcomings, strengths, etc. and have a re-arrangement in the planning of this event".

He continued: "We are going through a time of turmoil of Corona, a time when art, media and the potential of cyberspace came to the fore, so I think that because of this, the International Film Festival is growing from nostalgia to dignity and became an efficient event".

The Director General of the Office of Publications and Educational Technology of the Research and Planning Organization emphasized: "I think we should focus more on the educational film industry in the post-Corona period so that we can revive this field and the wide connection between this festival and textbooks."

Following the ceremony, the film "Sweeter than Honey" by Mohammad Ali Zarei Sharif was shown.

Then, Dr. Ali Mohebbi, Deputy of Curriculum Planning and Production of Training and Learning Packages of the Educational Research and Planning Organization, considered this festival as one of the best events at the national and international level and said: One of the advantages of Roshd Film Festival is the connection between film art and the play with education because it is an old and inseparable thing.

He added: "One of the advantages of Corona is that it has led us to foresight, where according to studies, more than 2,000 studies have examined and analyzed the characteristics of post-Corona students."

The Deputy Minister of Curriculum Planning and Production and Training Packages of the Educational Research and Planning Organization continued: "A few minutes of film can have a greater impact on public opinion than other methods, so it is referred to as the magic of the image."

According to the report, the closing ceremony of the 50th Roshd International Film Festival will be on Wednesday, February 17 from 4 to 6 pm with the presentation of the winners in the Palestinian Movie House.