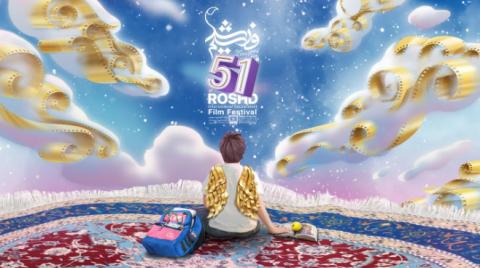 According to the Public Relations and International Affairs of the Educational Research and Planning Organization, at the beginning of the ceremony, the judges' statement focused on the 52nd International Film Festival of Roshd, the main themes of the event in the sections of short and long story, short and long documentary, animation and the section for filmmakers and students was announced.
Mahin Javaherian, a member of the jury in the animation category, Dr. Ali Mohebbi, deputy director of the Educational Research and Planning Organization, and Mohammad Ebrahim Mohammadi, secretary of the 51st Roshd Film Festival, presented awards in the animation category.

The need for educational investment in the field of animation

Mahin Javaherian, a member of the jury of the animation section, thanked the Roshd Film Festival and said: "I am happy that despite all the problems and dilemmas of Corona, which has had a great impact on all fields, this festival is still standing and we are proud of it."
She added: "Today, many countries use animation instead of courses." Interestingly, a number of the festival's animation works have been screened in French cinemas for five years and are a source of pride for us internationally.
The member of the jury of Roshd Festival stated: Two Iranian works are also among the courses of France, which is a reason of encouragement and pride for us. Therefore, I hope that with the support of education, we will be able to produce more films for Iranian schools and even abroad.
Following the ceremony, a one-man show was performed by Mr. Koohi, an actor, about teaching and how to teach, to the audience, and Dr. Maleki symbolically presented a quick response code design to this artist, on behalf of the teachers' community.
Then, Dr. Hassan Maleki, Deputy Minister and Head of the Educational Research and Planning Organization, spoke in this part of ceremony.
Following the ceremony, the winners of the documentary section of the festival were honored and artist awards were presented to them.
Nahid Rezaei, the director of the documentary "Spring House" in this section praised the Roshd festival and said: "This event is one of the only festivals that has its own policies and continues to work in this direction."
She added: "I am very glad that this work was seen, because there are people in our country who do very good and effective work for our country with anonymity and in the worst conditions." Mr. Bahar is one of those people who promotes books and reading in a remote village in the most difficult conditions. In fact, his action has led to the establishment of 50 libraries from Chabahar to Jask port. My greatest happiness is to see the film and pay attention to these areas and people.

Mohammad Khazaei, Deputy Minister of Culture and Islamic Guidance, while condoling the martyrdom of Hazrat Fatemeh Zahra (peace be upon her), said: "I am proud to stand as a teacher in this ceremony and thank the actions taken in this festival."
He added: "This event is one of the most important festivals that is performed in our country and was one of the ten most important festivals in Asia at one time, and there was a lot of enthusiasm for this event." During these years, according to the support and policies of the ministry, the festival has had many ups and downs, and it can be said that there was not a serious effort and knowledge that has led to less investment in this sector, so I hope that with the necessary support this festival can be influential in the educational environment of the country and in the international arena as well.
The head of the country's cinema organization continued: "In Turkey, I was asked to explain the method of the Roshd Film Festival in order for them to perform an example. Therefore, we must try to keep this trust in its place and not let other countries overtake us. Accordingly, it is necessary to take steps to return our rank in the region, Asia and the world to its peak.

A cinema working group should be formed

Khazaei added: "I hope that a working group of Cinema will be formed so that we can have a serious plan to support the screening of films suitable for students." Obviously, today our families should not worry about whether there is a film for children and adolescents in our cinemas or not? In fact, if we work together and create the conditions, the artists are ready to produce the work. Therefore, I hope that in the next few years, we will see suitable works for children and adolescents and we will be able to provide decent services to the community.
He continued: "Obviously, if we understand the scientific, research and educational functions of Roshd Festival, in the future, the country's educational system will definitely be influenced by this approach and perspective."
The winners of the short and long story sections were announced and praised.
Morteza Rahimi, the director of the feature film, presented his award to Martyr Ali Landi and said: "I am proud to present this work to the good spirit of Martyr Ali Landi and I hope that with the support of the Farabi Organization, we can present this work more widely."

Rasoul Sadr Ameli, a member of the jury of the story section of the Roshd International Film Festival, also said in this part of the festival: "We have many festivals in the country, some of which are not important, but Roshd Film Festival is a very important event that we should think about continuing."
He added: "This emphasis of mine does not take the form of poetry and slogans, as 51 years ago in Europe, festivals with the same titles were held."
"We have to invest in making films for this festival, and people have to make films with the aim of participating in this festival," he said. In this regard, it is necessary to establish a good relationship between students and the festival, because students all over the world are an important element in film production. On this basis, I hope that with the investment of this festival, it will return to its peak period and we will see the production of outstanding works in this field.

Dr. Gholam-Ali Haddad-Adel, President of the Academy of Persian Language and Literature, while condoling the Fatimid era, commemorated the martyr "Ali Landi" and said: "After the devoted peasant, today we have a devoted student( Ali Landi) who will be a model for our students."
While thanking the actions taken in the research organization, he said: "The continuation of this festival is to be admired and I hope that we will benefit in the best way from the achievements of this event."
The head of the Academy of Persian Language and Literature stated: "Roshd is a title that became a symbol of educational activities in the Educational Research and Planning Organization after the victory of the Islamic Revolution." The word Roshd was adopted in an era and became a key word in this field. Usually in the face of this word, physical growth is considered. But the real meaning of this word is navigation, so matured is someone who knows the rope, and it is a meaningful word.
Haddad Adel continued: "Roshd Festival is one of the oldest festivals in our country, which is in its fifty-second year this year." This festival was stopped for a while after the revolution, so I was informed about the possibility of reviving this festival when I was in charge of the research organization, so in 1985, we revived this event, and after a few years, this event was held again.
He added: "This festival was held during the difficult years of the war, when international communication was difficult, and it had an important message for inside and outside the country." I thank God for the continuation of this festival and I hope that we will see a better future for this event and we will see its growth day by day.
The head of the Academy of Persian Language and Literature thanked the two documentary filmmakers and said: "I need to mention Dr. Akbar Alemi and Khosrow Sinaei, who were well-known and literate figures in this field." Unfortunately, these two good artists are not with us today because of Corona.

Using the art of cinema in education

Dr. Haddad Adel pointed out: "We can be satisfied with the result of the festival when the students can see all the works of this event and use it in the body of education." Therefore, we must plan to use this capacity and possibility.
He continued: "Film can be very effective in subjects such as geography and science and helps students." So we have to consider such a possibility.
The head of the Academy of Persian Language and Literature added: "Today we are witnessing a leap in the field of technology, so it has become easier to prepare an educational film." Today, anyone with a mobile phone can make films that were not possible in the past. Accordingly, today, any student or teacher can use the mobile phone to view or create all the works, so we must pay attention to this leap and growth of technology. In this regard, we must institutionalize film production as a culture and make it possible to show works.
Dr. Haddad Adel stated: "We should pay more attention to educational videos in training future teachers. Therefore, it is necessary to pursue this issue so that this issue is included in teachers' curricula at Farhangian University."

Following the ceremony, a plaque of appreciation for the sacrifice of Martyr Ali Landi was presented to his father by the Minister of Education, Deputy Minister and Head of the Academy of Persian Language and Literature, and the family of this martyr was honored. Also, the works selected in this section were appreciated by awarding the badge of martyr "Ali Landi".
Marjan Khosravi, the director of "Wadiar", called for attention to the deprived areas and said: "Andika part of Khuzestan province needs attention after the earthquake, because these areas are in difficult conditions today while Islamic Revolution has so many martyrs from this area."

Dr. Yousef Nouri, Minister of Education of the 13th government, also spoke in this section.

Following the ceremony, the names of the selected filmmakers, teachers and students, were announced and the artists were honored.
The 5th Roshd Film Festival was held in Tehran from December 11 to 17. 3155 films from 105 countries participated in this festival. This year, for the first time, the Landi Martyr badge was awarded in some sections.
The 51st International Festival of Scientific, Educational and Training Films of Roshd was held nationally and internationally in the categories of feature story, short story, short documentary, feature documentary and animation with the participation of more than 105 foreign countries and 3155 works. Of these, 1980 films were from foreign countries and 1175 Iranian films were in the international sections, teachers, students, teachers and students.

This period of the festival was screened online through the link https://roshka.ir/live/roshd.

At the closing ceremony of the festival, the family of student martyr Ali Landi, Dr. Yousef Nouri, Minister of Education, Dr. Gholam Ali Haddad Adel, President of the Academy of Persian Language and Literature, Dr. Khazaei, President of the Cinema Organization, Dr. Hassan Maleki, Deputy Minister and Director of the Research Organization, deputies, managers and the staff of the organization, the headquarters managers of the Ministry of Education, the members of the jury and the selection committee of the 51st festival, artists, filmmakers, enthusiasts, teachers and filmmaking students were present.