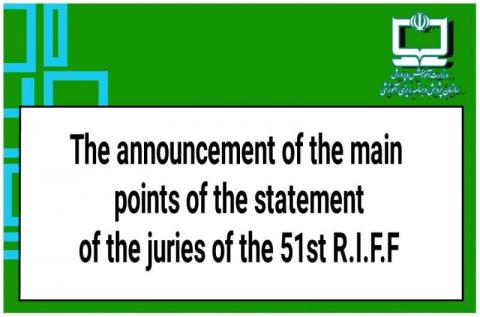 The main points of the statement of the juries of the 51st Roshd International Film Festival were announced, and it was emphasized that the filmmakers should pay attention to the high goals of the education system based on the daily needs of the main audience of the festival in the next period of Roshd Film Festival.

According to the report of Public Relations and International Affairs of the Educational Research and Planning Organization, the closing ceremony of the 51st Roshd Film Festival was held on Friday, December 17th, at the Palestine Movie House. At the end of the festival, the votes of the juries consisting of Iranian and foreign judges in the sections of short and long story, short and long documentary, animation and two sections of teachers and filmmaking students were announced.

In separate statements, the juries announced pillars for the promotion of the festival in the following periods, and the Permanent Secretariat of the 51st International Film Festival announced the growth of the pivotal axes as follows:

The main points of the juries of the 51st Roshd International Film Festival
While thanking all the Iranian and foreign filmmakers participating in the oldest film festival in Iran, the juries of this period of the festival express their satisfaction with holding this important cultural event in the critical situation of Corona Epidemic in the world. Teachers have long played an important role in promoting science, culture and art in society, and how beautiful it is for the art and filmmaking industry to serve teachers as a tool to play a more effective role in this important and effective matter.
The presence of many artistic and thought-provoking films that have dealt with the educational aspects of children and adolescents in this festival shows the importance of this cultural event in Iran and the world. Roshd International Film Festival is one of the most important art events in Iran and the world, which has been able to attract many filmmakers from Iran and around the world during the first half of the century.
Growing International Film Festival by providing
• Defining the goals of Roshd Film Festival based on research
• Screening of films, including the selected ones selected for the competition section in Persian, dubbed or subtitled in schools for students and teachers
• Holding educational workshops and creating a field for cinematographers to become more familiar with the issues and topics of the day in the field of education, especially for the production of educational documentaries for children and adolescents
• Strengthening the technical and content strength of teachers and filmmaking students
• The field of filmmakers' attention to the high goals of the education system based on the current needs of the main audience of the festival, namely education in Iran and the world
• Special attention of documentarians to new areas of application and collaborative observation in the field of research and directing (not necessarily relying on archival or speech-based resources)
• Field needs assessment of the festival in the correct selection of topics whose creation by artists contributes to the progress of society
To hold the 51st edition of this festival.

The 51st International Festival of Scientific, Educational and Training Films of Roshd Film will be held nationally and internationally in the categories of feature story, short story, short documentary, feature documentary and animation with the participation of more than 105 foreign countries and 3155 works. Of these, 1980 films were from foreign countries and 1175 Iranian films were in the international sections, teachers, students, teachers and students.

This festival was held from Saturday 11 to Friday 17 December and was screened online through the link https://roshka.ir/live/roshd.

At the closing ceremony of the festival, the family of student martyr Ali Landi, Dr. Yousef Nouri, Minister of Education, Dr. Gholam Ali Haddad Adel, President of the Academy of Persian Language and Literature, Dr. Khazaei, President of the Cinema Organization, Dr. Hassan Maleki, Deputy Minister and Head of the Research Organization, deputies, The directors and staff of the organization, the directors of the Ministry of Education, the members of the jury and the selection committee of the 51st festival, artists, filmmakers, enthusiasts, teachers and filmmaking students were present.
End of message