Art breathes the spirit of commitment into the human body 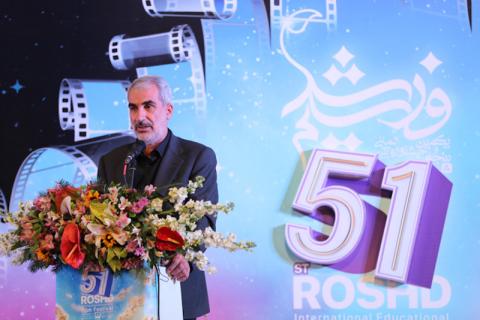 The Minister of Education said at the closing ceremony of the 51st Roshd Film Festival: "Art is one of the most important and accessible tools for conveying messages and education, and art can be considered as an image of the world of meaning, because art blows the spirit of commitment into the human body."

According to the report of Public Relations and International Affairs of the Educational Research and Planning Organization, Dr. Yousef Nouri mentioned the martyrs of teachers and students and said: " That today we see the result of their blessings in the form of security, peace, friendship and love."
He added: "In the movement of the Islamic Republic towards Islamic Civilization, we need new movements because, without a doubt, art is one of the most important and accessible tools for conveying messages and education, and art can be considered as an image of the world of meaning, just like the late Imam, who has depicted the blowing the spirit of commitment in the human body."
The Minister of Education of the 13th government stated: "As long as we do not make things artistic, there will be no acceptance, which is why this field has been called the art of education, because without art we will end up nowhere. In fact, the discussion of the relationship between art and education is very important and is considered one of the oldest relationships."
Referring to international efforts in the field of film, Dr. Nouri said: "In a period of time, Ferdowsi was able to keep the Persian language alive through the language of poetry, as if today, with the same view, Indians are using Bollywood to preserve Indian culture, and the Africans also worked with Hollywood in this area. As you know, Hollywood is one of the companies that has done a lot of research to manage public opinion and to frame this sector, and it is moving towards the goals of the rich and arrogant, so we should not ignore the effects of this art."

Incorporate art literacy into the curriculum

He pointed out: "Obviously, art is very important in various fields, including the field of education, so we must include artistic literacy in the curriculum. In today's world, art literacy is considered and components are considered for it, because by this, they can lead students' imagination and other indicators to growth and prosperity, but unfortunately this sector of art literacy in our country has not gained a good position."
The Minister of Education stated: "Unfortunately, we have not yet achieved conceptual literacy, and except for the elite, we have not achieved functional and multidimensional literacy. In multidimensional literacy, in addition to format, content and meaning flourish in the direction of social responsibility and values. However, in the Documents of Fundamental Transformation, this issue has been addressed and this is considered as one of the six areas of education. Therefore, artistic and aesthetic education is one of the dimensions that we must address.

The need to pay attention to the field of talent identification

Dr. Nouri stressed the need to pay attention to the field of talent identification and said: "Unfortunately, artistic talent identification has not been done in our society and we must have a special focus on this area. In this area, the approach in the field of education is focused on two parts: subject-oriented and feeling and meaning. In this regard, and in the view of the Supreme Leader and evolutionary documents, the approach of feeling and meaning, which has two subsets of creation and discovery of meaning within it, is considered the main element. In this direction, the art of creation must be in a way that does not offend the audience and is based on the Islamic standard system, so we must try to provide the students with the opportunity to cultivate imagination, the ability to encode and decode."

Film is an important element in education

The Minister of Education called film an important element in the direction of education and said: "Film is one of the arts that directly and indirectly affects the audiences Therefore, we need to know the film industry and its tools to know in what fields of study these films are and what to do in the face of it."
Dr. Nouri stressed the need to screen the works of this festival and added: "As long as the festival ends in this way, it will not have the necessary impact. Therefore, we must consider the necessary platforms for the production of films, in this area, so the economic field of artists grow and prosper, because this sector will increase the motivation of artists."
He continued: "The issue of talent identification is also very important in this area, so we must create a space for children and adolescents to be directed to the educational and intellectual center and to be able to find their field of talent and be educated. It is also necessary to prepare start-ups in this field so that students become more familiar with this field, because this leads to a serious talent search."

The Minister of Education added: "As trustees, we must get acquainted with the philosophy of film, so that we can empower students in this field and teach them the necessary skills, so we should not be contented with books in this field. In this regard, we must provide a space for students to debate and convey their views, because in this case, art will inspire a spirit of commitment to the human body."

The 51st Roshd Film Festival was held in Tehran from December 11 to 17. 3155 films from 105 countries participated in this festival. This year, for the first time, the Landi Martyr badge was awarded in some sections.
The 51st International Festival of Scientific, Educational and Training Films of Roshd Film was held nationally and internationally in the categories of feature story, short story, short documentary, feature documentary and animation with the participation of more than 105 foreign countries and 3155 works. Of these, 1980 films were from foreign countries and 1175 Iranian films were in the international sections, teachers, students, teachers and students.

This period of the festival was screened online through the link https://roshka.ir/live/roshd.

At the closing ceremony of the festival, the family of student martyr Ali Landi, Dr. Yousef Nouri, Minister of Education, Dr. Gholam Ali Haddad Adel, President of the Academy of Persian Language and Literature, Dr. Khazaei, President of the Cinema Organization, Dr. Hassan Maleki, Deputy Minister and Head of the Research Organization, deputies, The directors and staff of the organization, the headquarters managers of the Ministry of Education, the members of the jury and the selection committee of the 51st festival, artists, filmmakers, enthusiasts, teachers and film students were present.