The blood of the oppressed will never be wasted... 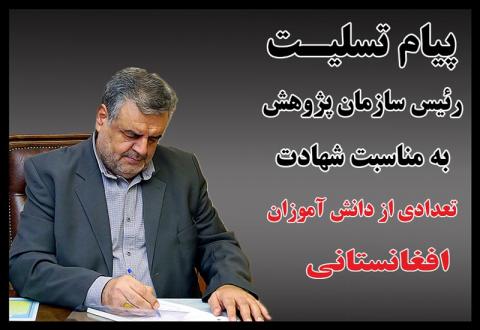 The Deputy Minister of Education and the Head of the Educational Research and Planning Organization issued a message of condolence on the occasion of the explosion and killing of oppressed students in Afghanistan.

According to the Public Relations and International Affairs of the Educational Research and Planning Organization, the text of Dr. Hassan Maleki's condolence message is as follows:

The blood of the oppressed will never be wasted, and the oppressors and tyrants will abide in the divine hell forever!

The sad news of the death of a large number of oppressed schoolgirls in the Dasht-e-Barchi in Afghanistan hardly touched our hearts and increased our grief over such horrific and inhumane events in Afghanistan.

It is reported that on Saturday evening, May 7, 1400, coinciding with the twenty-fifth month of Ramadan 1442, ISIS criminals stormed a Shiite girls' high school in western Kabul, which unfortunately killed and injured more than two hundred people, most of whom are the oppressed girls of this school, who were martyred while fasting! And, of course, this is the second time they have committed such crimes against girls' schools. It seems that in their ignorant thoughts, they consider girls' as a education forbidden act!

If a bitter incident had taken place in Europe, they would have declared a week of public mourning and trumpeted such news with all their power using propaganda and media. But when it comes to the oppressed Shiites of Afghanistan, it is as if human rights and the United Nations are dead, and they do not even ostensibly condemn these crimes.

But by the true promise of God, the blood of these oppressed girls and other slain people will soon wrap up the scroll of the savage and oppressive ISIS, which is created by the criminal United States in Afghanistan, that we believe the blood of the oppressed will never be wasted. The oppressors and tyrants will be immortal in the divine hell forever.

A terrible and bitter incident that undoubtedly reminds us of the great name of the proud martyr of endurance and resistance, Martyr Haj Qasem Soleimani. A hero who may the peace and blessings of God be upon his high spirit and his companions who, along with the martyrs who defended the sanctuary, have always been in battle with such criminals and have always been victorious by divine judgment.

With a heart full of sorrow, while condemning this cruel and inhumane crime, I express my condolences on this tragic incident to the Supreme Leader, the grieving and suffering families of this unfortunate event and the honorable and grateful people of Iran and the grieving teachers and students.

We hope that by the advent of the Holly Savior of the world, Hazrat Mahdi, we will see an end to such horrible crimes and God willing, the spirits of the oppressed students and of Afghanistan remains high and the souls of the students who were martyred be blessed by God.