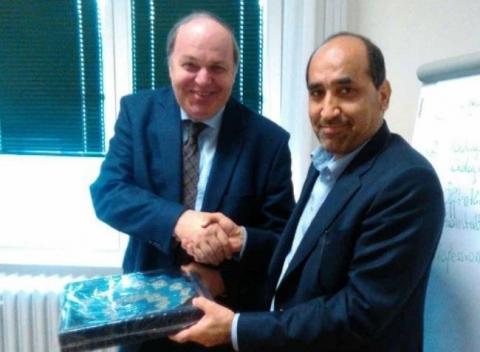 Deputy Minister of International Affairs and Head of the Center for International Affairs on Thursday January 25, 2018, met with the Deputy Minister of Education and Science of Austria. At the said meeting, concerning the new law on schools in Austria, the issue of continuation of the Iranian School in Austria was discussed and it was stipulated that the headings of all the educational systems of Iran in English or German will be available to Austrian Education Ministry within a month.

The Embassy of the Islamic Republic of Iran was introduced as the founder in order to complete the process of obtaining a school permit at a new location in accordance with the Austrian private school regulations. The Austrian Deputy Minister said that he would provide the necessary support for the continuation of the Iranian school in Vienna in accordance with the host country's educational system. Dr. Karimi, head of the Center for International Affairs and Schools Abroad, referred to the expansion of cooperation between the two countries in the fields of economics, science and technology, which called for increased communication and interaction between the two countries in the field of pre-university education, which was welcomed by the Austrian side. The topics of interest will be reflected to each other so that a conference and workshop be organized to share experiences.

Regarding the travel of delegations, delegations from both sides are required to accept travel and accommodation expenses from the host country. At this meeting, Deputy of the Iranian Ambassador in Vienna who is also the head of Iran's school in the city was present. It is worth noting that Dr. Karimi visited the school of the Islamic Republic of Iran in Vienna and talked with teachers and staff at the school. They also visited a school with the Austrian educational system and examined the dimensions and angles of continuing the activity of the Islamic Republic of Iran School in Vienna, in accordance with the new law of the country's private schools.