The disputes between Iran and the U.S. stem from the 1953 coup in Iran 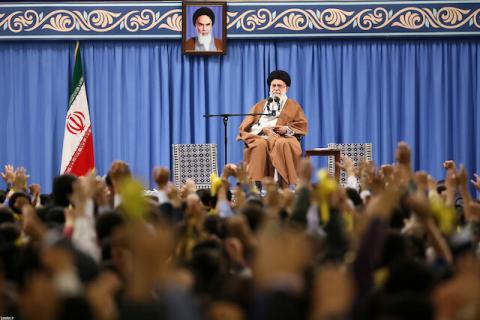 Ahead of the National Day of Fighting Global Arrogance and the National Day of Students, a group of school and university students met with Ayatollah Khamenei— the Leader of the Islamic Revolution— at the Hussayniyeh of Imam Khomeini, this morning November 3, 2019.

The following are the excerpts of the statements his eminence made at this meeting:

"The U.S. has not changed since November 1964 when its puppet regime exiled our beloved Imam Khomeini. The same aggressive, vicious behaviour and the same international dictatorship has continued. Today it has become weaker than in 1964, but it has become more brutal and impudent."

"The Americans distort history and pretend that the Iran-U.S. disputes stem from the takeover of the U.S. embassy. No! It goes back to the 1953 coup d'état, when the U.S. overthrew a national government – which, of course, had made the mistake of trusting the United States - and established its corrupt and puppet government in Iran."

"After the victory of the Revolution, during the last 41 years, the U.S. has carried out all the hostile actions it knew against the Iranian people, including coups, ethnic provocations, arousing separatism, sanctions, sieges, etc. Of course, we were not inactive and did everything we could to confront the U.S.; and in many cases, we managed to corner them."

"Our most important confrontation with the United States was to block the way for American political re-infiltration into our country's foundation. Avoiding negotiations is also one of the ways to block American infiltration. It means that there is a nation in the world that does not recognize the usurpation, tyrannical power, and international dictatorship of the U.S."

"Some imagine that negotiations will solve all the problems. This is one hundred percent wrong. The U.S. wants to show Iran that it has been brought to its knees by accepting to negotiate. Cuba and North Korea’s experiences are in front of our eyes. They took photos and even expressed love for the North Korean officials. But they didn’t reduce the sanctions even a little."