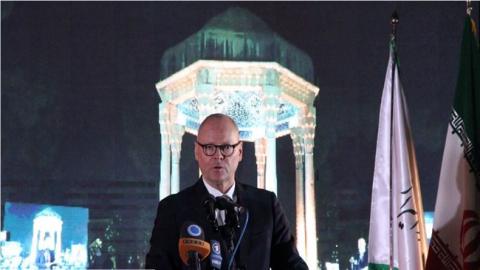 German Ambassador to Iran Michael Klor-Berchtold described the world emanating from the thoughts of Hafez is a poetic world based on friendship and love, saying that the great Persian poet led the German poet Johann Wolfgang von Goethe 200 years ago to reach a milestone in understanding among nations.

Addressing the inaugural ceremony of the German Cultural Week in the south-central city of Shiraz, he added that Goethe was impressed by Hafez’s poems, as he developed a spiritual bond with him.

Noting the spiritual kinship between Hafez and Goethe, the ambassador added, “Over 200 years ago, Goethe launched a new discourse with his newly-found twin which has brought Iranians and Germans together today.”

German Cultural Week is being held to mark the lapse of two centuries since Goethe’s the ‘West-östlicher Diwan’ (West–Eastern Diwan) was written, but the event goes beyond that, as the book symbolizes getting closer to each other and mutual understanding.

Hafez and Goethe were not merely poets, literati and philosophers, rather they were freethinkers, as they did not live within the established frameworks of their time, the German official said.

Wherever freethinking prevails, there is no room left for imposed structures and this is the point on which both poets agree, he said, noting that Goethe discussed putting an end to arrogance and extreme strictness and believed that if nations do not want to love each other, they should at least learn to tolerate one another.

The ceremony, slated to run until November 4, includes various programs in terms of cinema, theater, art and literature.

Goethe wrote the ‘West-östlicher Diwan,’ which contains his poems, notes and essays, under the influence of Hafez’s poetry.

He was familiar with Hafez and his works through his friendship with Austrian Orientalist Joseph Freiherr von Hammer-Purgstall (1774-1856) who provided the first ever complete translation of the Hafez poems into a Western language.

The ‘West-östlicher Diwan’ was first translated into Persian by Shojaeddin Shafa in 1949. There is another translation of the book by Kourosh Safavi.