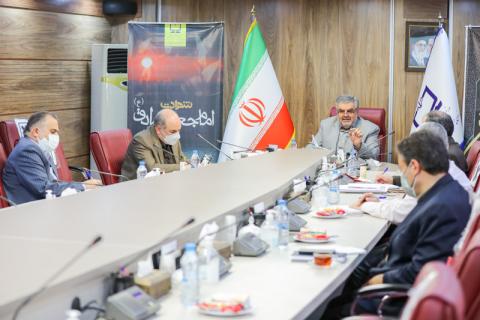 The Deputy Minister of Education emphasized in the meeting in the Martyr Mousavi Basij base of the Educational Research and Planning Organization, that Imam Khomeini's thought is the Imam of Thoughts.

According to the Public Relations and International Affairs of the Educational Research and Planning Organization, the meeting was held in the presence of Dr. Hassan Maleki, Commander of the Martyr Mousavi Basij Base, members of the Righteous Circle and managers of the Research Organization to commemorate the name, memory of the great founder of the Islamic Revolution.

At the beginning of the meeting, Mehdi Jalali, Deputy Commander of the Basij, presented a report on the plans of the Basij Resistance Base of Martyr Mousavi until the end of 1400, and then Dr. Eini, Head of the Library and Documentation Center of the Organization, presented a report on the appearance of Imam Khomeini image in elementary school textbooks.

Then Dr. Hassan Maleki, stating that we are in front of a triangle of mourning, said: mourning the anniversary of the martyrdom of Imam Ja'far Sadegh (AS), mourning of the death of Imam Khomeini (RA) and mourning of the 15th of Khordad which was declared by the late Imam as mourning day this day, I ask God Almighty to grant us all the success of spiritual and epistemic productivity from these mournings and to keep us on the right path.

The Islamic Revolution of Iran is dynamic and alive

The head of the Educational Research and Planning Organization noted: "Our wise and prudent leader introduces the Islamic Revolution as alive and dynamic in the second step statement." His Holiness's statement shows that we have had dead revolutions throughout history. The French Revolution, for example, took place with a specific discipline and defined ideals and with specific goals, but it soon emerged and went into hiding, and from this revolution a man named Napoleon was born, so by his death that revolution died.

He added: "The October Revolution of 1917 in Russia was a revolution of the proletariat and the workers against the factory owners and capitalists in the time under Lenin, which took place with a special plan, but Stalin was born out of this revolution." That is, this revolution also died.

The revolutions that were earthly and worldly disappeared

Dr. Maleki, referring to the blessed verse "We are with you and we are with God," said: It is natural that everything that is earthly, the end of it is nothing but death. Those revolutions died because they were examples of that they were worldly and formed for worldly purposes. Now one is called the proletariat and the working class and the other is called the middle class against the aristocracy and feudalism.

In another part of his speech, the Deputy Minister of Education stated: Imam Khomeini (ra)'s thoughts, thoughts and words are the amir of all words. If we distance ourselves from the Imam of thoughts, it is not clear where our destiny will lead to.

He added: "The Islamic Revolution of Iran is moving towards lofty goals." I ask you to never forget the statement of the second step of the revolution and sometimes consider and see how the Supreme Leader of the Islamic Revolution has presented a plan and a charter for the past, present and future of this dear revolution. The plan we have to move on.

A piece of the Quranic teachings of the late Imam

Dr. Hassan Maleki further stated: The Institute for Organizing and Publishing the Works of Imam Khomeini (RA) has worked on a very valuable collection of interpretive and Quranic evidences of Imam Khomeini, and I would like to express some phrases from it to your mind and myself. Connect to a piece of the late Imam's Quranic teachings.

He added: Imam was also a commentator on the Quran. It is true that he did not comment specifically, but in various situations he wrote commentaries on the Qur'an and its numerous verses, and his writings have been collected and are currently being published in three volumes.

Maliki, referring to verse 36 of Surah Saba, which says: "Resurrect to God, collectively and individually, and then think." That is, be sure that if you rise up for God and this rise of yours is accompanied by thinking and reasoning, you will surely achieve prosperity and salvation.

The head of the research organization continued: Imam says in the following verse: "All matters start from here that the uprising should be for " God " and stands for God. Wake up from this sleep. Get up for "God, rise up for God, and walk." This is the plan of the Islamic Revolution of Iran. It is interesting that this verse and this statement were said when the Islamic Revolution of Iran has not been formed yet, but the Imam has been designing the plan of the revolution and laying the foundations of the revolution for about 15 years before the revolution.

Dr. Maleki, stating that there is a relationship between the short Qur'anic chapter of Asr and the Islamic Revolution of Iran, said: I referred to different interpretations of the Qur'an and saw that our commentators have typically defined "Asr" as "time" and have only given different examples. It is only in the mind of the late Imam that the matter is decided differently. He says "Wal-Asr" means "I swear by the essence of the universe". This is a unique and special interpretation so you can extract this era of meaning. It means swearing to a perfect human being. We say swear to God and God Almighty swears to man.

We must fight against Tyrant

The head of the research organization, referring to the verse 216 of Surah Al-Baqarah, and said: God says, "The Book is for you to fight." That is, war was written on you. In fact, God says that war was written on us because there is arrogance, oppression and all kinds of idolatry. Is there no Tyrant right now? Isn't America a heresy? There is tyranny in Afghanistan and Iraq and the fingers of USA is bloody. Now that there is Tyrant, what happens if we eliminate war? So we have to fight.

Dr. Maleki stated: Imam Khomeini says in the following verse: "We and our Islamic nation have not been and are not warmongers and invaders and we did not like this imposed war. But you all know, and everyone in the world knows that this crime was took place by USA and the Ba'ath party and Saddam and the Saddamists, while we are fleeing from war, but defense, which is the right of every human being, and "It is incumbent upon every human being to defend himself, to defend his country, and to defend his religion. We stand against these powers as a defense."

The head of the Educational Research and Planning Organization pointed out: God says in verse 139 of Surah Al-Imran: In my opinion, God says do not be lazy, do not be sad, you are superior, but there is a condition and that superiority is your faith. Now Hezbollah and Hassan Nasrallah are alive with faith, and the Palestinian fighters have gained strength by believing in "God Almighty."

The Deputy Minister of Education emphasized: Man can lose himself in two situations, one at the peak of happiness and the other at the peak of sorrow. Imam has warned this. They say if it works out in your favor, do not lose yoursef and be strong and always be moderate.

Emphasizing the need to participate in the 13th presidential election and elect the right person, Dr. Maleki emphasized: The issue of elections is the continuation of the Islamic Revolution of Iran. We should not look at the forthcoming elections only as a political event and as an electoral event like the elections of other governments and nations. The essence of elections is to protect the honor, dignity and the Islamic Revolution of Iran. The enemy is waiting for the number of participants at the ballot box to come down and for them to maneuver, and we should not allow this to the enemy by participating of more people in the elections.

"Our people are fairly experienced people, but the situation is sensitive, and we need to know that the issue of elections is not the issue of chicken prices, eggs, yogurt, and these things," said the deputy education minister. Of course, these are also important issues, and in fairness, the people are not comfortable, and the supreme himself said this in his last orders, but these issues should not prevent us from going to the polls. The United States, Israel and the arrogant ones are counting the moments until the 28th of Khordad and they do not want to see those long lines of elections, and you should know in this situation that our vote is like shooting at the hearts of the enemies.

Then, the members present at the meeting discussed, and then Dr. Hassan Maleki in the final part, emphasizing the optimal use of the capacities of the Basij, said: We now need a guide to the curriculum of jihad and resistance. I ask Mr. Nabati to form a team and design a special curriculum guide for the culture of resistance and provide it to the groups so that each group can contribute to this guide. You follow this in the form of a plan and I support it.

In the end, the head of the Educational Research and Planning Organization emphasized: "It follows from the conclusions that firstly, the Islamic Revolution of Iran honored us and secondly, the Imam taught us courage with the leadership of the revolution and we should not lose the path of the Imam." The wise and supreme leader of the revolution continues to lead the nation in the same way, and we should not leave them alone. In this case, victory will surely belong to us and defeat will belong to the enemy.

This meeting was held on the occasion of the anniversary of the demise of Imam Khomeini and the uprising of June 6.