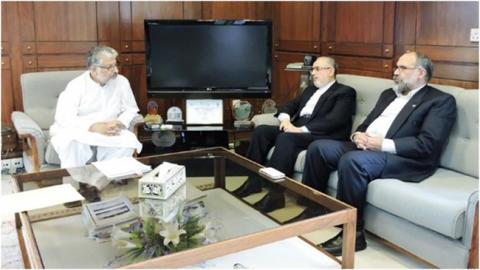 Iran's cultural attaché in Pakistan proposed a nationwide conference in Islamabad to be attended by Pakistani professors of Persian language and literature.

Shahabeddin Daraei, who was speaking in a meeting with Chairman of Pakistan's Higher Education Commission (HEC) Mukhtar Ahmed in Islamabad on Friday further underlined the need for expanding scientific and university cooperation between Iran and Pakistan, IRNA reported.

He proposed that a Pakistani university host the nationwide conference of Pakistani professors of Persian language and literature.

The meeting was also attended by Isa Karimi, the head of the Persian Language Research Center in Islamabad.

Daraei added Iran's cultural office in Pakistan is keen to foster relations between Iranian and Pakistani scientific and university centers and is willing to hold scientific conferences in cooperation with the HEC to this end.

Sa'di Shirazi was one of the major Iranian poets and literary men of the medieval period. Muhammad Iqbal (November 9, 1877-April 21, 1938), widely known as Allama Iqbal, was a poet, philosopher and politician as well as a barrister and scholar in British India who is widely regarded as having inspired the Pakistan Movement.

Speaking in the same meeting, Ahmed welcomed the Iranian official's proposal and said Sa'di and Iqbal are symbols of the two countries' literary character.

Iqbal and Sa'di are, respectively, the national poets of Pakistan and Iran, he added.

"We were also seeking to make such a move. However, to see that the Iranian side has put forward the proposal first makes us happy. We are willing to cooperate in this project."

He added the friendly relations between Iran and Pakistan indicate cultural, historical and religious connections between the two neighboring Muslim countries.

"We are optimistic that the two states can expand ties in the future."

In the meeting, Daraei extended an invitation to Ahmed to go to Iran in the near future and visit the country's universities.