Iranian Animation Wins Best Award at Int’l Festival in US 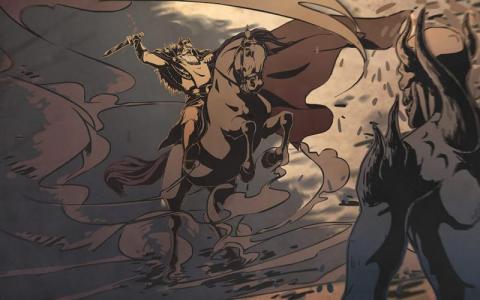 The Best Feature Animation award of the 6th edition of Epic ACG Fest in California went to the Iranian title “The Last Fiction”, an animated interpretation of a popular Persian folklore, bringing its international awards to 12.

“The Last Fiction”, written and directed by Ashkan Rahgozar and produced by Ehsan Rasulof at Hoorakhsh Studios, is one of the 32 submissions for this year's Animated Feature category of the Academy Awards.

It is an open interpretation of the story of “Zahhak”, a page from one of the central tales of the 'Book of Kings/Shahnameh’ written by acclaimed Persian poet Ferdowsi between 977 and 1010.

The film follows Zahhak's treacherous rise to the throne in Jamkard in Persia. The young and naïve hero Afaridoun will have to save the kingdom and its people from darkness. But he must first conquer his own demons in this portrayal of Persian mythology which reveals human nature.

The voice cast includes top Iranian actors such as Leila Hatami ('A Separation'), Parviz Parastui ('Today') and Ashkan Khatibi ('So Close, So Far').

Iranian cinema has made great progress in the years after the victory of the Islamic Revolution of 1979, to that extent that many Iranian films bring home numerous international awards every year and Iranian directors and their films are well known in all cultural venues across the globe.