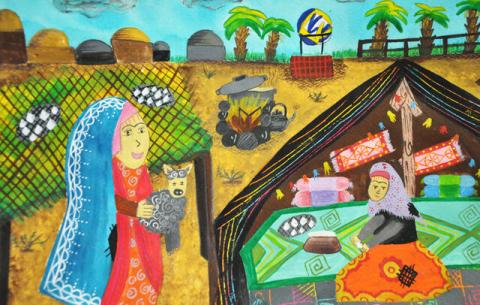 Two rose medals and four honorary diplomas from the 48th International Exhibition of Fine Arts for Children "Lidice" in the Czech Republic were awarded to the children of Iranian artists.

According to ISNA, and quoting the General Office of Public Relations and International Affairs of the Center, the exhibition of fine art paintings of children "Lidice" in the Czech Republic in 2020 with the theme "Landscape" was held in two sections: painting and photography. And 216 works received from 78 countries, six members of the cultural and artistic centers of the Center were selected.

Accordingly, 8-year-old Ratin Eteqad, a member of the Behbahan Center in Khuzestan Province, and 13-year-old Mehta Abed, from the 16th Center of Tehran, received the Rose Lydia badge in the painting and photography sections, respectively.

The Center for the Intellectual Development of Children and Adolescents participated in the 48th International Exhibition of Fine Arts for Children "Lidice" in the Czech Republic by sending 191 paintings and 150 photographs. The awards will also be presented to the winners at a ceremony by the Czech ambassador in Tehran.