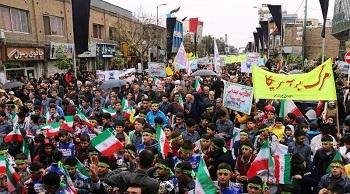 People, especially students, took to the streets in various cities across Iran to mark the 40th anniversary of the capture of the former U.S. embassy, known as the “den of espionage”, in Tehran.

In the capital Tehran students joined a large gathering of people outside the former embassy building to honor what is considered a milestone in Iran's ongoing fight against hegemonic system.

The marchers chanted slogans against the United States and Israel.

After forty years since the takeover of the embassy, the Iranian people’s view Washington’s policies has gone from worse to worst as the current administration in the U.S. has introduced the harshest ever sanctions against their country in violation of international law.

The embassy was taken over students nearly nine months after the victory of the Islamic Revolution, which ended the despotic rule of the U.S.-backed Pahlavi dynasty.

The students detained 66 embassy staff who were in the process of destroying classified documents that would have incriminated them in plotting to topple the nascent Islamic Republic system.

Iran released women, African Americans and as well as a man who was diagnosed with multiple sclerosis days later but kept the remaining 52 detainees for 444 days.

The saga finally ended after Iran agreed to release the detainees under a deal mediated by Algeria, through which the U.S. undertook not to take hostile action against the Islamic Republic.

Through years, however, Washington has flaunted the agreement and done everything it could to harm Iran and topple the Islamic Republic.

The student who took over the mission were able to piece together the shredded remains of various embassy documents that hinted at Washington's secret plots against Iran and the Islamic Revolution.

Ayatollah Khomeini, founder of the Islamic Republic, hailed the move by describing it as the "second revolution."

According to Press TV, on Saturday Iran celebrated the event by unveiling new murals on the walls of the embassy, which signified key aspects of the Islamic Revolution and Iran's resistance against the U.S. hegemony.

Standing out among the wall drawings is the painting of the Iran Air Flight 655, a passenger flight that was shot down by the USS Vincennes on July 3, 1988 as it was flying over the Persian Gulf with 290 people aboard.

Near the painting lies a minimalist drawing of a U.S. Global Hawk stealth drone that was shot down on June 20, 2019 by the Islamic Revolution Guards Corps (IRGC) immediately after it violated Iranian airspace over the Persian Gulf.

Army chief: U.S. would have derailed Islamic Revolution if embassy had not been captured

Addressing the marchers, Army chief Major General Abdolrahim Mousavi praised the seizure of the embassy in November 1979, saying the United States was seeking to undermine the Islamic Republic through its embassy.

The commander said the United States has been directly or indirectly involved in inciting civil wars and conducting coups in at least 60 countries over the past 100 years and predicted that if Washington’s embassy had continued its work in Tehran, the Islamic Republic system most likely would have found a fate similar to 60 other countries.

The top general enumerated certain reasons, including a coup against the democratically elected government of Mohammad Mosaddeq on August 19, 1953, that led to the capture of the embassy by students.

“Oppressive, anti-people and humiliating behaviors of the U.S. government, the Mordad 28 coup, support for the Pahlavi regime, plundering of the Iranian resources and animosity with the Islamic Revolution led to the capture of American’s den of espionage.”

The CIA-orchestrated 1953 coup is known as the Mordad 28 coup d'etat in Iran.

“Aban 13 is a day in which the Iranian people showed that through reliance on God a nation can withstand against any hegemonic power and achieve victory,” Mousavi pointed out.