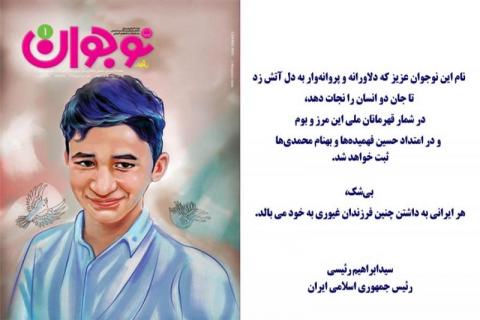 The Deputy Minister of Production and Publication of Roshd Magazines, The Office of Educational Publishing and Technology announced that in the first series of distribution of Roshd Magazines, in October 2021, the image of the national hero, the martyr "Ali Landi" will be published in Roshd Magazine. In an interview with the Public Relations and International Affairs Organization of the Educational Research and Planning Organization, Seyed Kamal Shahabloo stated: Sacrifice, as the heirs of Martyr Hussein Fahmideh and thousands of students who were martyred for the sake of Islamic Revolution, will never end. His image as a permanent frame in Teen Roshd Magazine; The pure sense of self-sacrifice, courage and sacrifice of the Iranian youth will be immortalized among the boiling springs of the lasting growth of the Islamic Revolution in the sacred space of schools. He added: "After the incident and in the very first days; After the initial treatment, the report of this self-sacrifice and devotion with Ali's own words was supposed to be published in "Roshd Nojavan" magazine, a collection of Roshd magazines. Unfortunately the plan and dream was not fulfilled, and as a result, the Adolescent Roshd Magazine publishes in September 2021 with a picture of Ali Landi as a "symbol of devotee and selfless Iranian teenager" and as a "national hero" to reach the hands of his classmates and all the young readers of this magazine." Shahabloo said: "This teenager's action to save two women caught in the fire, in addition to showing a great courage, bravery and zeal of the great Iranian teenager, can be a story for the young generation of society and a flip to the huge number of Iranian teenagers and youth when he showed how one can be a man to save his fellow human beings by sacrificing his own sweet life for the cause and attaining eternal life." It is worth mentioning that Shahid Ali Landi, a 15-year-old teenager from Izeh, set his heart on saving his neighbor's house which was in fire and saving the lives of two middle-aged and elderly women who lived in that burning house. This devoted teenager suffered with 91% burns in different areas of his body, from head, face to back and arms and legs. He was first transferred to Taleghani Hospital in Ahvaz and then was transfered to Imam Musa KazemKazem Hospital in Isfahan to continue his treatment in a more complete and effective way. Despite the compassionate efforts of the medical staff, this brave child of Iran died after about 10 days, due to the injuries caused by severe burns. End of message