The message of the Minister of Education to the 51st International Film Festival of Roshd , and emphasis on the entry of festival films into schools 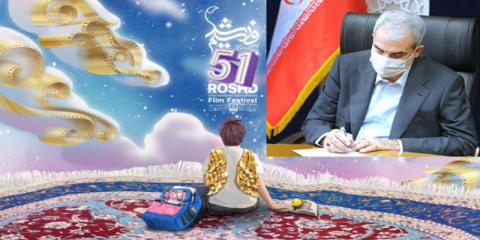 The Minister of Education issued a message on the occasion of the opening of the 51st International Festival of Scientific, Educational Films and emphasized the entry of the films of this festival into schools.

According to the report of Public Relations and International Affairs of the Educational Research and Planning Organization, the full text of Dr. Yousef Nouri's message is as follows:

In the name of God, Most Gracious, Most Merciful

"Roshd International Film Festival, which is celebrating its 51st year this year, is one of the most important cultural, educational and training events that can have effective and useful effects and results in educating the country. Educational films and all artistic tools and instruments such as cinema each play a role in the education of children and adolescents in the country and are effective in creating a wider space for education. Especially if the content of art and artistic tools are linked to Islamic education, they will gain more value and will be more in line with the orientation of the country's educational system.
Roshd International Film Festival, as the longest running educational film festival, is an honorable international event in the Islamic education system that can increasingly identify and play a role in the education and learning packages and multimedia education influenced by the Fundamental Transformation Plan in Education. Introducing and organizing talented teachers and students in the field of filmmaking was considered the best gift of this festival to Iranian cinema.
Film is a comprehensive art in which the collection of arts is manifested. Image, relevance, size, vividness, dynamism, durability and effectiveness are the hallmarks of the film. The value of art doubles when it is in the service of education, and according to education experts, learning through seeing gains more depth.
While thanking and appreciating all those involved in holding this festival, I hope that over time and according to the educational needs based on the Document of Fundamental Transformation in Education, the quality of the festival and selected educational films will improve and a festival will be held at the level of the Islamic Revolution. Although the current situation of the festival has improved compared to the past, more efforts should be made to achieve better fruits and it is necessary for the selected films to reach the audience easily and on time, and to distribute them in schools and public media. No matter how much effort is made in this regard, the festival will achieve the expected goals and the cultural consumption of its products will be achieved in a desirable way."

The closing ceremony of the 51st Roshd International Film Festival will be held on Friday, December 17th at the Palestine Movie House.