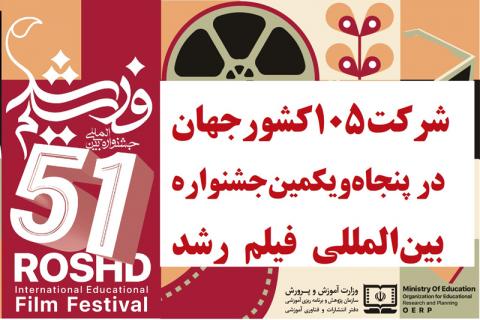 The secretary of the 51st Roshd International Film Festival announced the presence of 105 countries by submitting 1950 films to the festival. According to the Public Relations and International Affairs of the Educational Research and Planning Organization, Mohammad Ibrahim Mohammadi stated: "Short and long animations from 105 countries have been submitted to the Roshd Film Secretariat, which are currently under review and judging." The Director General of the Office of Publishing and Educational Technology continued in this regard: "India, USA, Italy, Turkey, Russia, Spain, Brazil, France, Egypt and the United Kingdom are the 10 countries that have submitted the most works for this festival, respectively. We have also received the least works from Zambia, Yemen, Singapore, Rwanda, Malawi, Macedonia, Guatemala, Ethiopia, Ecuador, Dominican Republic, Costa Rica, Benin and Albania. This is while there are still a few days left until the deadline for receiving the works and it is possible that this number will increase in the coming days. It should be noted that according to previous announcements by the Roshd Film Secretariat, all Iranian and foreign filmmakers interested in participating in the 51st Roshd International Film Festival, who have not been able to register and submit their works by 7th of October, have until 22nd of October will have to register and send their work. Producers and filmmakers can refer to the site eff.roshd.ir while studying and observing the rules of the Roshd Film Festival, to register and send their works in the following two ways To. A) Completing the participation form of the festival and uploading the work link in the eff.roshd.ir system B) Completing the participation form of the festival, receiving the tracking code and sending the work on a CD to: No. 270, Corner of Azarfar Alley, North Iranshahr St., Tehran - Secretariat of the Educational Research and Planning Organization Phone numbers of Roshd Film Festival Secretariat: (+98-21) 87196563 - 87196557 - 88301479 is ready to answer the participants' questions on active days from 8:00 AM to 2:00 PM. The e-mail address eff.roshd@oerp.ir will also be ready to receive written messages from filmmakers. End of message