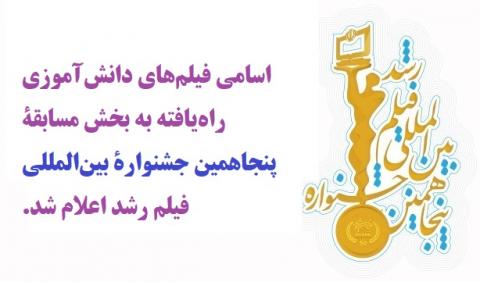 According to the report of Public Relations and International Affairs of the Educational Research and Planning Organization, this year 2110 foreign films in the form of fiction, documentary and animation have been sent to participate in the 50th Roshd Film Festival, and the judging and evaluation of these films has begun.

Ruhollah Malmir, chairman of the selection committee of the 50th Roshd Film Festival, confirmed the news: "Roshd International Film Festival has hosted a large number of films from different countries of around the globe every year due to its unique features. "Fortunately, this year many directors and producers from different countries of the world have joined the festival. A total of 2,110 foreign films have been downloaded and reviewed by selection boards."

The head of the selection committee of the 50th festival explained: "According to the statistics of the 50th Roshd Film Festival Secretariat, 1021 short and feature films, 664 short and feature documentaries, 355 animated films and 70 films on the subject of Covid 19 from 110 countries have been submitted to the Secretariat of the Roshd. After the initial evaluations of these works, finally 136 animated films, 180 short fiction films, 18 feature films, 72 short and feature documentaries have entered the second stage of the selection round.

According to the Secretariat of the 50th Roshd International Film Festival, the 15 members of the selection committee of the 50th Roshd International Film Festival have completed their review of Iranian works on January, and have already started the final stage of evaluating foreign works. Accordingly, it is expected that the names of Iranian and foreign films that have entered the competition section, as well as the names of Iranian filmmakers' students and teachers, will be announced by January.