President in a national meeting of the Ministry of Education: 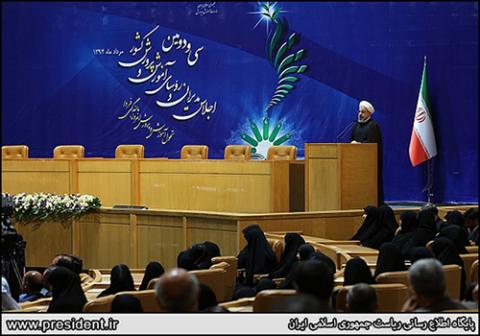 He made the remarks on Tuesday, addressing national meeting of the Ministry of Education attended by directors of the ministry in Tehran.
Supporting his government's policy of moderation, he added, 'We should not be as pessimistic as saying that it is useless to talk, nor yield to saying that it is useless to do anything and that anything they say should be accepted.'
'Some thought we should not sit at the negotiations table with major powers. Some said major powers do not follow logic, and therefore, we have to surrender or confront them. But the government adopted the third option that we should not give up before major powers and that through logic, diplomacy and negotiations, we can neither surrender nor take distance from our objectives.'
On the issue of loss or gain at the talks, he added, 'I believe that the idea of win-lose game is not appropriate in the world today. Even if possible, it will not endure and the party that feels lost will agitate the game in near future.'
President Rouhani said the Supreme National Security Council is holding numerous and extra-ordinary meetings in which the text of joint nuclear agreement with 5+1 is being studied.
'If a nation is united in close ranks under same flag and the shadow one leader and with a government equipped with social capital, it can stand against world's powers,' he added.