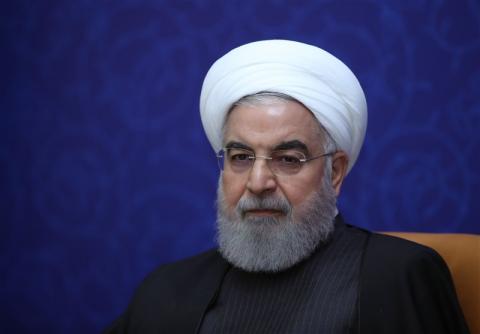 President Hassan Rouhani said on Tuesday that the number of people hospitalized and deaths due to the coronavirus are decreasing in Iran, which show important measures have been taken.

Speaking at the session of National Task Force for Fighting Coronavirus, President Rouhani said only 1/3 of the state employees will be present at their offices on shifts until April 3 and also prisoners' furlough will be extended until April 1.

Thanking the health system of the country for all the hard work, dedication and sacrifice it is making for this important work and the people for heeding the recommendations, President Rouhani said that the statistics show that most people pay attention to these recommendations.

He suggested that the workplaces and gatherings be shut down until April 3. He also advised gatherings like funerals and wedding receptions be canceled.

President Rouhani also wanted the delivery companies to take what people need to their homes so that fewer people come out of their homes.

He also wanted television to advertise these companies free of charge so that people get acquainted with them.

President Rouhani added that the military staff will be present at their workplace as they did before.

Head of Iran's Health Ministry Public Relations Office Kianoush Jahanpour said on Tuesday that 8,913 people out of a total of 24,811 infected by the coronavirus have survived the deadly disease while 1,934 have unfortunately succumbed to death.