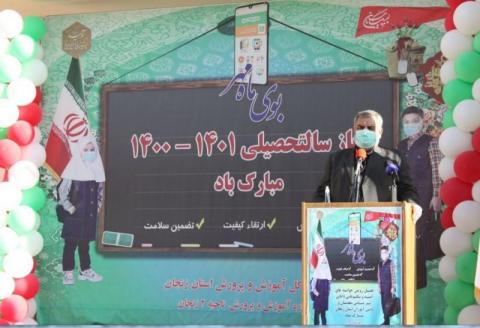 The bell of the beginning of the 1401-1400 academic year was rung in the presence of the Deputy Minister and the Head of the Educational Research and Planning Organization and a number of provincial officials at the Zanjani Oil Memorial School in Zanjan, District 2.

According to the Public Relations and International Affairs of the Educational Research and Planning Organization, in this ceremony, Dr. Hassan Maleki, while greeting the good souls of the martyrs of Islam, the Islamic Revolution and the imposed war, especially the martyred teachers and students, said: I salute the good spirit of the student, Ali Landi, who is the hero of Izeh, A teenager who, when he saw two of his neighbors who were caught in the burning fire, show his braveness and rescued them, and once again showed that there is a special connection between the Islamic Revolution of Iran and the pure blood of teenagers.

He added: "Youths participated in the war and were martyred in the victory of the revolution and were pioneers in the field of defending Islam and the country in the imposed war." How can we forget the Martyr Hussein Fahmideh and teenager s like him ? This hero teenager who saved two of his neighbors but gave his life and joined the supreme kingdom in Heaven.

The head of the Educational Research and Planning Organization continued: "Teenagers should be proud that sometimes such examples arise among them and raise the science of revolution in the world and declare that the Iranian nation is against arrogance or against other forces that oppose the Islamic System and they will not get tired and will stand against them as long as the world remains and the Islamic Revolution of Iran continues.

Dr. Maleki, while thanking and appreciating the representative of the Supreme Leader in Zanjan province and the Friday prayer leader of Zanjan, Ayatollah Ali Khatami, said: How nice and continuous the support of Imam of Zanjan is, in the field of education in the city of Zanjan, and at the national level, we sometimes benefit from the orders and utterances of this respected figure. I sincerely thank you for your support and guidance. Also, as the Deputy Minister of Education, the esteemed governor of Zanjan province and all the esteemed heads of the institutions and organizations of the province who have joined hands to work together to overcome the special crisis of the Corona virus that has dominated the whole world and our country as well. I express my gratitude and appreciation.

Face-to-face and virtual teaching are quite different

The Deputy Minister of Education pointed out: "Everyone, especially the dear students, have understood the difference between face-to-face education and distance education, even with the most advanced technology and tools." If we think carefully, we will know that the great outcome that is in face-to-face training, can never be found in distance learning. In-person training is a good capital, even if it is held at a low level. It is in face-to-face instruction that the student sees the teacher and the teacher sees the student and questions are asked and answered, and in these interactions, the student and even the teacher will both be satisfied. Basically, if there is an intermediary between the coach and the student, education will decline as well.

Dr. Maleki stated: God Almighty sent His prophets for a mission and that mission is education, humanization and guidance. If the prophets chose war, jihad, the livelihood of the people and the political issues of their time, it was all a gateway, not a destination. It was all for human beings and spirituality to grow. People communicated directly with the Prophets and Imams (as) directly and without intermediaries, because God knows that there should be no distance between the educator and the pupils, even through mobile phones, the Internet and the tablets, all of which are necessary and should be used, but they never replace the smile and anger of the teacher and the teacher's interactions with the student.

The Deputy Minister of Education stated: "Today, in front of you, from the Supreme Leader of the Revolution and the esteemed, popular, revolutionary and popular president of the country to the lower levels, everyone is determined for face-to-face training." Of course, this move will be gradual and contingent, but we must know that this path has begun and no one should return from this path.

"The classroom is a sacred and valuable place," said the head of the Educational Research and Planning Organization. Every person who has reached a place or position, has reached it from his classroom, not from an open, abandoned and absentee education. However, distance learning is also valuable in its place and technology tools should be used instead. I would like to say now that, according to the directive of the Ministry of Education, we are moving towards the stages of teaching in person, we should not hesitate and take firm steps so that no marginal things are raised. This path must be upright, conscious and wise, as well as gradual but prudent.

The priority of education is to maintain the health of students

Dr. Maleki Last night, in a TV interview with the Ishraq Network, said that what is important for us is the health of the students. Everywhere, if the principal feels that the health of the students is endangered by face-to-face training, that is our red line and he must announce it to his district so that they can make other decisions after the announcement. But what is certain is that the path to face-to-face training is unquestionable, and we will be able to move in that direction with the help of God.

The Deputy Minister of Education said: "The Iranian nation is facing a critical situation, which, of course, is coming to an end, thank God." It is appropriate to mention Martyr Chamran, who has uttered a sentence about fighting the enemy on the battlefield, and this sentence is not unrelated to my petitions. He says that when the battle trumpet is played then you will know who the cowards are and who the braves are.

The ceremony was also attended by Hassan Mozaffari, director general of education in the province, a representative of the Supreme Leader and Friday prayer leader of Zanjan, and other provincial officials. The mother of the great martyr Rahim Javadi was also honored and the symbol memorial of the 3535 Martyrs of the province was unveiled.