Prosperous element of people’s will blossomed by Islamic Revolution 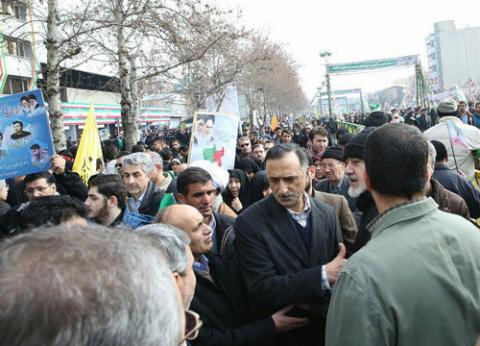 According to the Public Relations of Ministry of Education, message of Dr. Fakhreddin Danesh Ashtiani reads as follow:

“In the Name of God, creator of Dawn“

As the middle of winter approaches, a reach pride and a green pleasure captures body and souls of Iranians, for in this cold winter, a resurrecting spring is born and brings with it blossoms of awakening and dignity.

“Bahman” is the month in which, the strong tree of “Islamic Revolution”, whose sapling was planted many years ago by great Khomeini, bears fruit.

This revolution successfully filed away rusts from beloved Islam, refurbished it and showed the shinning truth of this religion to the world.

Islamic Revolution realized historic desire of nation of Iran, which is summarized in three phrases of “Independence, Freedom and Islamic Republic” and as the most cultural revolution of contemporary era, relying on religion and morality socially deepened and attracted common people as well as nobles.

Because of Islamic Revolution, prosperous element of people’s will appeared in a vast horizon, not only in words but by approving the constitution which established a democratic regime, compatible with Islam and Iranian culture accompanied by wisdom and foresight.

From this point of view, “Religious Democracy”is a reflection, a path and of course a possible and advantageous way which we should study and learn and teach as well.

Now, at the eve of 38th anniversary of victory of Islamic Revolution, glorifying martyrs of revolution, Imam Khomeini and Imam Khomeini’s comrade, late Ayattolah Hashemi Rafsanjani, I offer my most graceful congratulations to brave nation of Iran, especially noble community of education, students and parents and invite them to participate in the glorious rally of 22nd of Bahman, as they always enthusiastically do.