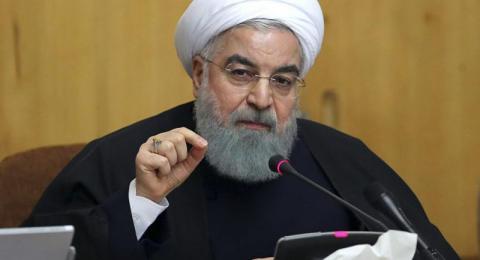 Speaking at a cabinet meeting on Monday, President Hassan Rouhani said the United States has deprived Iran of “clean waters but instead is offering muddy waters”.

Rouhani made the remarks as Iran is fighting the worst pandemic coronavirus disease in the Middle East. Despite this critical situation, the U.S. still refuses to lift illegal sanctions against Iran.

“The United States claims it wants to help Iran fight coronavirus but it's a lie," he said.

The president added, “This is like one prevents another one from drinking clean water, but instead offers that person muddy water."

As of Monday, 23,049 Iranians are confirmed to have been infected with the coronavirus. Of this number, 1812 have lost their lives.

Rouhani called the U.S. sanctions “cruel”, “illegal”, and an instance of “terrorism”, saying certain countries are working with the U.S. in sanctions against Iran, which have made the situation more difficult for the Islamic Republic.

President Donald Trump has slapped the harshest sanctions in history against Iran in line with his administration’s “maximum pressure” campaign against the Islamic Republic. It has introduced a total oil embargo against Iran with the aim of choking off the Iranian economy.

“The Americans are blocking our oil sales…. and are responsible for some of the unemployment and hardship of the Iranian nation. The Americans have committed the biggest crimes in the Middle East and Iran, but claim that they want to help Iran fight corona,”  Rouhani told the first cabinet meeting in the new Iranian calendar year (Nowruz).

Rouhani also thanked the Iranians for following the instructions of the National Task Force for Combating Corona and the guidelines of the Ministry of Health, saying, "The people have acted well.”

Rouhani, who was elaborating on the measures taken to counter the coronavirus, also said his administration should take steps in line with “jump in production” in the New Year based on the decree of Ayatollah Ali Khamenei, Leader of the Islamic Revolution.

Ayatollah Khamenei,  in his Nowruz message, called for a “jump in production” in the current year.

"Another issue that I must emphasize is that we must do our utmost to develop the nation's progress. The Supreme Leader has named this year the year of a 'jump in production' and we need to double our efforts,” the president stated.

He added, "Ministers should now announce the list of projects that can be opened in the new year.”

The president went on to say that the slogan of “jump in production” can be carried out through good relations with neighbors and friendly countries. “If we are to make a leap in production, we need to attract investors, technology, import raw materials and export manufactured goods”

He added “good foreign policy and diplomacy can help” realize the goal.

He also said it is necessary to reform the banking system, stock exchange, customs, tax law and improve the business environment to realize leap in the production sector.