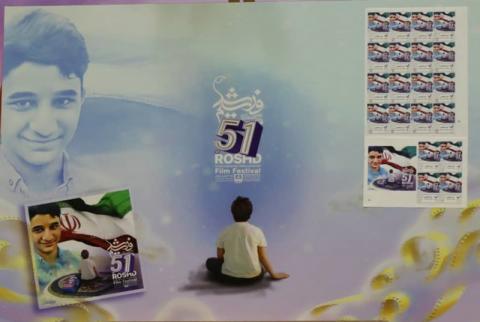 The special emblem and stamp of Shahid Ali Landi was unveiled at the 51st Roshd International Film Festival, which will be awarded to selected works.

According to the report of Public Relations and International Affairs of the Educational Research and Planning Organization, the special emblem and stamp of Martyr Ali Landi was unveiled on Saturday, December 11, at the opening ceremony of the 51st Roshd Scientific, Educational and Training Film Festival with the presence of Dr. Hassan Maleki, President of the Organization, Hojjatoleslam Hamid Mohammadi, the head of the organization, Mohammad Alavi Tabar, the organization's deputy director of resource development, and Sobhan Qari (ceremony reciter/speaker), as the students' representatives.

This meeting was held in the presence of a group of directors and education experts, teachers and students, artists and actors of children and adolescent cinema and educational films, and a number of teachers in Tehran.

Dr. Hassan Maleki, the head of the Educational Research and Planning Organization, had previously said that the Roshd International Film Festival is a suitable and worthy platform that can identify anonymous and unique models of this land in the form of strong art and media and in the form of educational packages in introducing a banquet of light, image and sound to students of different school courses. Therefore, it is worthwhile in this period of the festival, which is also on the eve of the second century of its manifestation, to be adorned with the name and memory of the heroic movement of this brave teenager to pay more and better attention to the magnificent works that have been or will be produced in this field.

Martyr Ali Landi, a student who belongs to hearts, was martyred as a model of courage and self-sacrifice some time ago by sacrificing his life to save the lives of his two neighbors. From now on, this badge will be awarded to the works and productions of the model of the field of educational and fiction films of this festival in Roshd Film Festivals. This badge was designed by Kazem Talaei and at the end of the 51st Roshd Film Festival, will be awarded to the flagship film of this period of the festival. Martyr Landi's special stamp was also designed by Nahid Moin al-Roayaei.

The closing ceremony of the 51st Roshd International Film Festival will be held on Friday, December 17th at the Palestine Movie House.