The speech of the Supreme Leader on Quds Day 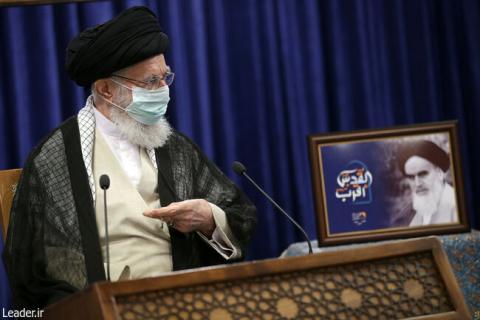 The Supreme Leader of the Islamic Revolution on the last Friday of the holy month of Ramadan and World Al-Quds Day, referring to a serious shift in the balance of power in favor of the Islamic world and the Resistance Front, and in contrast, the apparent decline of US and Zionist power and normalizing relations with several weak states, he said that these won't stop the declining movement of the occupying regime and the logical fulfillment of the referendum demand of all the main inhabitants of Palestine to determine the political system of this country, and addressed the Palestinian Mujahideen to continue their legitimate and moral struggle against the usurper regime, as the demand will be progressive.

Ayatollah Khamenei considered the Palestinian issue as the most important and living common issue of the Islamic Ummah and said: The policies of the oppressive capitalist system have sent a nation out from its home and have placed a terrorist regime and a foreign people in it.
Referring to the deeply weak logic of the establishment of the Zionist regime, the Leader of the Revolution added: Can one find a logic weaker and shakier than that of the establishment of the Zionist regime? On the basis of their claim, the Europeans oppressed the Jews during the Second World War, therefore they believe that the oppression against the Jews should be revenged by displacing a nation in West Asia and by committing a horrible massacre in that country!
This is the logic which western governments have relied on with their wholehearted and blind support for the Zionist regime, thereby disproving all their false claims about human rights and democracy. It has been 70 years now that they have been sticking with this laughable and at the same time tragic story and every now and then, they add a new chapter to it.
Since the first day, the Zionists turned the usurped Palestine into a terrorist base. Israel is not a country, rather it is a terrorist camp against the Palestinian nation and other Muslim nations. Fighting against this despotic regime is fighting against oppression and terrorism. And this is a collective responsibility.
Another noteworthy point is that although that the usurping regime was established in 1948, the ground for occupying that sensitive Islamic region had been prepared years before that. Those specific years coincided with the active interference of westerners in Islamic countries with the purpose of establishing secularism and excessive and blind nationalism and also with the goal of installing despotic governments who were infatuated with or controlled by the West.
Studying those events in Iran, Turkey and Arab countries stretching from West Asia to North Africa reveals this bitter truth that weakness and discord in the Islamic Ummah paved the way for the disastrous usurpation of Palestine, allowing the world of arrogance to deliver that blow to the Islamic Ummah.
It is instructive that at that time, the capitalism and communism camps colluded with the rich Zionists. It was the English who masterminded the plot and who persisted in it and then, Zionist capitalists executed it with their money and weapons. The Soviet Union too was one of the first governments that officially recognized the establishment of that illegitimate regime and later on dispatched a large number of Jews to that area.
The usurping regime was actually an outcome of that situation in the world of Islam on the one hand, and of a European plot, invasion and transgression, on the other.
Today, the situation in the world is not like those days. We should keep this reality within sight. Today, the balance of power has swung in favor of the world of Islam. Various political and social incidents in Europe and in the United States have laid bare the weaknesses and the deep structural, managerial and moral conflicts among westerners. The electoral events in the US and the notoriously scandalous failures of the hubristic and arrogant managers in that country, the unsuccessful one-year fight against the pandemic in the US and Europe and the embarrassing incidents that ensued, and also the recent political and social instabilities in the most important European countries are all signs of the downward movement of the western camp.
On the other hand, the growth of the Resistance forces in the most sensitive Islamic regions, the development of their defensive and offensive capabilities, their growth of self-awareness, motivation and hope in Muslim nations, the increasing tendency to follow Islamic and Quranic slogans and the growth of independence and self-reliance in nations are auspicious signs of a better future.
In this auspicious future, cooperation between Muslim countries should be a main and fundamental goal and this does not seem unlikely. The pivot around which this cooperation turns is the issue of Palestine–the entirety of that country–and the fate of Holy Quds. This is the same truth that guided the enlightened heart of the great Imam Khomeini (may God bestow mercy upon him) towards the announcement of International Quds Day on the last Friday of Ramadan.
Cooperation between Muslims around the pivot of Holy Quds is an absolute nightmare for the Zionists and for their American and European advocates. The failed project called “The Deal of the Century” and the effort to normalize the relations between a few weak Arab governments and the Zionist regime were desperate attempts to run away from that nightmare.
I tell you with confidence: These attempts will not get them anywhere. The downward movement of the Zionist enemy has started and it will not stop moving downward.
The decisive factors in the future: The continued activities of the Resistance in the occupied lands and Muslims’ support for the Palestinian mujahids
There are two determining factors in the future: First and foremost is the continued activities of resistance in the Palestinian lands and the strengthening of the line of jihad and martyrdom and second, global support, on the part of governments and Muslim nations throughout the world, for the Palestinian mujahids.
All of us–government officials, intellectuals, religious scholars, political parties and groups, the brave youths and people of various social backgrounds–should determine our position in this public movement and play our part.
This is what nullifies the enemy’s plots and it will be an apoclyptic manifestation of this Quranic verse: “Or do they intend a plot? But those who defy Allah are themselves involved in a plot” The Holy Quran, 52: 42, and “And Allah has full power and control over His affairs, but most among mankind do not know” The Holy Quran, 12: 21.