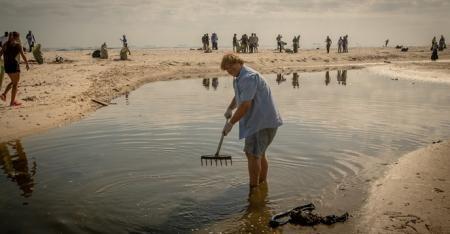 Not everything that looks like trash is trash. That was the fundamental challenge when a UNESCO prizewinner from Estonia, the Let’s Do It Foundation, had the idea to create an image-based trash detection system using Artificial Intelligence (AI).

In recent months, the laureate of the 2018 UNESCO-Japan Prize on Education for Sustainable Development(ESD) has been busy inventing an algorithm refined enough to distinguish trash in geolocated images and videos. The AI tool called WADE (Waste Detector) has been developed in collaboration with Microsoft and the data science company SIFR.

The Foundation works by mobilizing millions of positive-minded, action-oriented people to tackle environmental and social problems related to mismanaged solid waste. The Let’s Do It received the Prize for two grassroots initiatives World Cleanup Day and Keep It Clean, which address the global problem of mismanaged waste and stimulate sustainable social and environmental change.

World Cleanup Day’s aim is to inspire volunteerism in local communities around the world; develop and empower a network of leaders; and empower countries, particularly developing ones, to deal resiliently with litter now and in the future. National and regional leaders – 'cleanup advocates' – build local networks to run nationwide cleanups in which anyone can participate by using a mobile app which maps waste around the world. From its start in Estonia ten years ago World Cleanup has evolved to become a worldwide movement with around 36 million volunteers in 169 countries. Preparations are underway for the next World Cleanup Day(link is external)on 21 September 2019.

Trash is difficult to detect

Of the newly refined WADE system Technology Manager Kristiina Kerge said: 'Trash is actually a complicated object to detect. Imagine a restaurant table with cans of soda on it, people having fun, eating and drinking. In that context, cans are not trash. When those cans are discarded on the street, they can most likely be considered trash.

'In fact, trash is a word people use for an object that lacks purpose, and the purpose of an object is often not obvious in the images we use for teaching an algorithm to spot trash.'

WADE allows for the identification and mapping of waste much faster and more accurately than people can.

'We started with a sample of images, trained the model, and analyzed the results. Based on the results, we determined what images we had to add to the next iteration of training,' said Kristiina.

'Now for example, citizens using 5 different mobile apps can map 121 waste points per day. At the same time, WADE is able to analyse more than 8 million images a day. Collecting data about mismanaged waste is important not only for visualising the global trash problem but also to give academics, policy-makers, educators and businesses information about where the hotspots are, why they are there and what might be the solutions to stop waste ending up in nature or on streets.'

In the coming months, the Foundation will be focusing on engaging stakeholders to start using WADE, with the aim to make at least 1 billion people in the world aware of the trash problem. The data collected by WADE will be integrated into ESD train-the-trainer programmers giving trainers visualisation tools to better explain the extent of the waste problem and also localise it in order to find solutions.