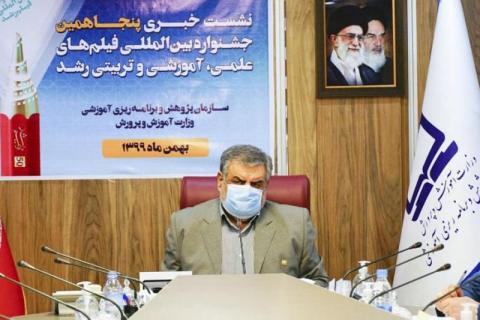 The press conference of the 50th International Roshd Film Festival was held at the Educational Research and Planning Organization on Monday, February 8, in the presence of the Deputy Minister of Education, the Festival Secretary and the Director General of the Office of Educational Publishing and Technology.

According to the report of Public Relations and International Affairs of the Educational Research and Planning Organization, the press conference of the 50th Roshd International Film Festival began with the unveiling of the festival teaser and poster among the media.

In this meeting, Dr. Hassan Maleki, Deputy Minister of Education and Head of the Organization stressed the need to pay attention to educational films and its impact on the field of education and said: Roshd International Film Festival is a genuine and influential cultural and educational event that this year is its 50th year, and the people of art and media have realized its value and effectiveness and they know very well that the education can make the work of art long lasting.

Referring to the antiquity of this event, he said: "Undoubtedly, every event and work of art can be sustained through education, and this fact is not hidden from the people of art." Accordingly, in the fiftieth edition of the festival, there was more emphasis on this issue because basically this year we were looking for a different and effective maturity and we intend to profoundly change the curriculum.

The Chairman of the Policy Council of the 50th International Roshd Film Festival emphasized: "The Document of Fundamental Transformation in Education will be the main basis of this academic change for us and we will follow it, by God willing, this process will be completed before this year's holidays."

Dr. Maleki called educational media an effective factor in implementing the educational transformation and added: "In this evolutionary view, educational media and learning play an effective role, one of the most important of which will be the discussion of educational films." In fact, change means making sense by visualizing and objectifying what has been learned, so if we follow education only in the form of audible topics, what is offered to the student will not lead to change. So we seek to benefit from various tools and media, and above all, educational videos to follow this development.

Use festival works for transformation

He linked the fate of Roshd International Film Festival to the transformation program, saying: "This year, the fate of Roshd International Film Festival will be deeply linked to organizational change, because according to surveys, we all know today that more than 70% of students learn through visual forms, so the form of learning and the evolution of curricula will be related to the output of this festival. Obviously, if we want to create confidence and peace in the heart of the learner, we must be able to use his visual power, and this is possible only through the use of our educational packages and in the form of educational videos. So the works of this festival are have a main and meaningful place in our education.

The Deputy Minister of Education announced the implementation of software transformations in the form of an education document and stated: The process of software transformation of courses will enter another field before 1400, in which students and their parents can use encrypted codes or The so-called SQR CODE to access the archive of approved works, so the festival is a contributing event in this transformation. In this program, students will be able to enter the national network by scanning the code and use the enriched contents of the textbooks.

The Chairman of the Policy Council of the 50th International Roshd Film Festival announced the possibility of the presence of foreign works in this section and said: "Certainly, adding this fact to the course section and the possibility of using educational videos will give more richness to this section, so we will try to use films suitable for students' education." Our educational goals are specific and closely related to the Transformation Documents and the general goals of the education system, and with this goal the discussion of augmented facts through cryptography is considered in the textbooks, but this does not mean that we want to deprive ourselves from international experiences in this field.

As he called the identification and introduction of domestic and foreign educational films as one of the goals of the festival, said: Utilizing the capabilities of the film and television industry and its effective role in the process of learning, cultural and artistic exchange between Iran and other countries and encouraging prominent artists from Iran and other countries of the world to make scientific and educational films will be among our goals in this festival. At the same time, we try to establish a proper relationship between the producers of scientific and educational works and the enthusiasts of the cultural privileges in this type of works.

Presence  of 110 countries in the 50th Roshd Film Festival

The head of the Educational Research and Planning Organization announced the presence of 700 teacher filmmakers in this period of the festival and said: "One of the main differences in the 50th Roshd International Film Festival is the presence of 700 filmmakers in this period." We also had participants from 110 countries, despite the existence of Corona Virus and limitations and the problems that plagued the world due to this contagious disease.

Dr. Maleki explained how the festival will be held: "We hoped to hold the 50th Roshd Film Festival in person and in a more glorious way, but unfortunately this is not possible due to Corona and health protocols, so this year we are deprived to hold it in person and most of the works will be done virtually. In addition, foreign guests will not be able to attend the course and will follow the event virtually.

He added: "Monitoring and reviewing the last 49 periods of the festival in an expert manner and with a pathological view is one of the other differences of this period." We try to provide the results of this monitoring and review to the guests and the audience during the festival, so the films of the previous 49 festivals will be used in educational and learning packages, and after obtaining permission from the creators of the works, these works will also enter the arena.

The Deputy Minister of Education stated: "Roshd Film Festival is not a separate event from the Research and Planning Organization, and the activities in this field are tied to transformation programs."

In the continuation of this meeting, Dr. Maleki, in response to the question of the media about reducing the distance between the products supported by this organization and the box office and showing among the people, said: the more specialized we act to reduce the distance in this sector, the better. . Of course, it is obvious that these distances are possible by using artistic criteria and standards, so the form and arrangement of the jury and the selection in this period were formed with this view. Of course, we hope that in the coming years we will be able to take more effective steps in this direction and direct the works to the public, because the festival should be the beginning of a precise process to benefit the people from these works. One of the topics that we need to focus on in this regard is the permanence of the festival secretariat, because this can help educational films to be seen and present in the arena.

According to this report, the 50th International Roshd Film Festival will be held in Palestine Movie House from February 13th to 17th.